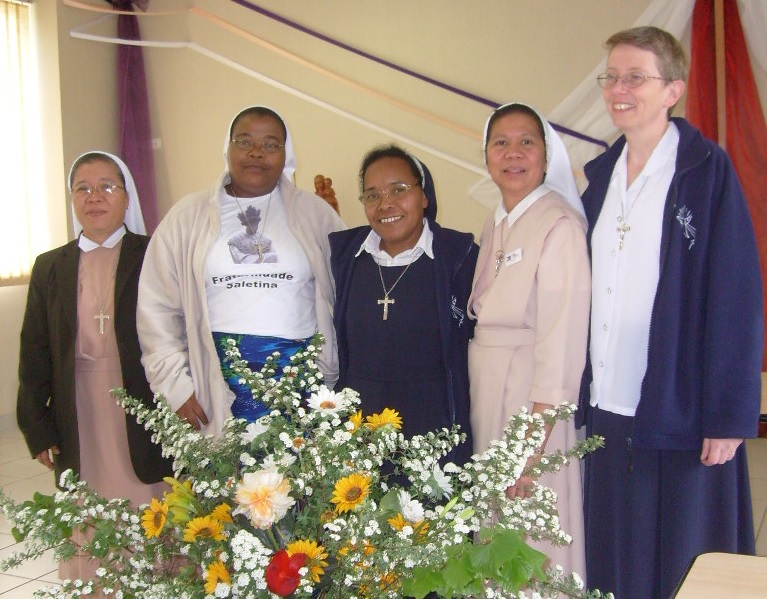 
Marie appears to two children Maximin and Mélanie, on September 19th, 1846 in the Mountains of Salette.

A few years later, in 1861, Miss Deluy Fabry, comes on pilgrimage to Notre-Dame of Salette. She leaves Salette with the intuition to have to establish a religious Congregation being inspired by the apparition. She confides then in Mgr. Ginoulhiac, Bishop of Grenoble. September 17th, 1871, the Congregation of the Nuns of Notre-Dame of Salette is born. Very fast, it will more be known under the name of the "religieuses réparatrices" of Our Lady of la Salette.
On February 2nd, 1930, in the diocese of Soissons, on the initiative of P. Crozet, Superior General of Missionaries of la Salette, is born the congregation of the Sisters Missionaries of Our Lady of la Salette.

The spirituality and the Constitutions of these two congregations leaned on the Message of Our Lady of la Salette.
A will of union of the salettine "family" begins to germinate. Discussions and notices are shared from 1955. A first spark had shone from 1944 but it was maybe little early. It is only after 1955 that the correspondences become regular and that the project of union becomes concret.

March 25th, 1962: the union of both Congregations is officially realized. Every house receives, from his Eminence Bishop Fougerat, a circular indicating the Sisters elected for the Provisional Government.
The union becomes effective following a new decree of the Holy See, on December 6th, 1965.

The first chapter of the Congregation takes place in 1968. Four special chapters will allow the elaboration of Constitutions in 1968, 1969 and in 1980 and on 1981. Constitutions are approved by Bishop Matagrin, Bishop of Grenoble, one May 17th, 1986.
In 1997, in Angola, a community of the Sisters Messengers of Our Lady of la Salette is recognized by Bishop of Benguela. They merge with the La Salette Sisters in 2004.
A fusion with religious Jésus Rédempteur and Marie Médiatrice finalized in April, 2013.

According to our Constitutions :
Sisters of Our Lady of la Salette:
A life given "The spirit of Reconciliation, as the Sisters discern it in the gesture and words of Mary in Her apparition is expressed by a life of prayer, sacrifice and apostolate".
A Life of prayer
A life in fraternal community
A life of service
A life with international dimension "As the Father sent me, I too, send you" (Jn 20, 2). "I am the servant of the Lord, may I am made according to your word" (Lc 1, 38).
"The grace of La Salette sensitizes the Sisters to the call of Christ, who case to announce the Good News to the poor. They want to pass on the call to conversion launched by Mary for the sake of "Her people": "If they are converted" and to respond to Her request: "Well, my children, make it known to ail My people." (Constitutions 36)

"Meditation on the gestures and words of Mary in Her apparition guides the Sisters in the choice of their apostolic activities and enables them to grasp more fully the spirit in which they are to be carried out". (Constitutions 38)

"In the spirit of Reconciliation, which is the grace of La Salette, the Sisters engage in every form of the apostolate that is apt to promote the development of the human person through respect for his dignity and liberty. In the milieus where they are sent, they strive to build peace and unity through justice and charity". (Constitutions 40)

"The spirit of Reconciliation, as the Sisters discern it in the gesture and words of Mary in Her apparition is expressed by a life of prayer, sacrifice and apostolate. Their prayer is joined with that of Mary who, in heaven, through Her constant intercession, never ceases to obtain for "Her People" the graves of salvation.
Their sacrifice is realized in their self-offering to God, renewed each moment through their acceptance of the Father's will, which leads them, along with Mary, to share in the redemptive life of Christ and His sacrifice on the Cross.
Their apostolate is marked by the very love that makes the Blessed Virgin Mary attentive to the needs of Her children. This love fills their hearts with an active concern for the poor, the underprivileged and all who are in distress. By their whole life, the Sisters want to be witnesses to Christ's call to Reconciliation and conversion". (Constitutions 7)

A community life rooted in prayer, a spirit of reconciliation, an effort of apostolate - such are the characteristics of the Congregation of the Sisters of Our Lady of la Salette.

Presence in the world:
Today, La Salette Sisters are more or less 250 in 11 countries: France, Brazil, Madagascar, Philippines, USA, Poland, Angola, Myanmar, Italy, Canada, Algeria.
They answer to the call of Christ in a life of community, prayer, gift, active presence with those who are needy. By all their life, they aim to be witnesses of the call of Christ to the reconciliation and the conversion.