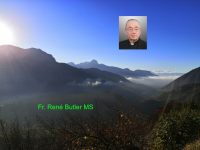 Most Catholic Churches do not have a statue or other image of Jesus seated on a throne as King of the Universe. All, however, have a crucifix prominently displayed, showing Christ at the supreme moment of his love for us.

The crucifix worn by Mary at La Salette is, as we have often stated, central to her apparition. It is also unique. People who see it for the first time invariably ask what the hammer and pincers mean. (It’s interesting to ask them first what they think it means.)

The simplest answer is that the children described these as part of the Beautiful Lady’s dress, not attached to the cross but under its arms. Apart from that, there is no official interpretation. The most common explanation, however, is that the hammer represents sin, driving the nails into Jesus’ hands and feet, and the pincers symbolize repentance, removing the nails. In other words, they indicate a choice.

Today’s gospel, too, shows us Christ crucified. Put yourself at the scene. Hear the cries, “Save yourself!” Note that he is one of three criminals being crucified that day. The other two are on his right and left.

One of those joins in the hostility of the crowd. “Are you not the Christ? Save yourself and us.” He shows no compassion for a fellow sufferer. The other rebukes him, and then expresses amazing faith and hope as he says, “Jesus, remember me when you come into your kingdom.” These are the only kind words addressed to Jesus on the cross.

There is, if you will, a parallel between the La Salette crucifix and the two criminals. One, like the hammer, causes pain; the other, like the pincers, undoes it. Again we see the choice for or against Christ, presented in an especially poignant manner.

Jesus responds with a promise: “Amen, I say to you, today you will be with me in Paradise.” (At La Salette, the equivalent is the prophetic vision of abundance, accompanied by living hope.)

If the people there mocking him only knew what we know, as St. Paul writes in 1 Corinthians 2:8, “they would not have crucified the Lord of glory.” They might have understood that he chose not to save himself because he was saving us.