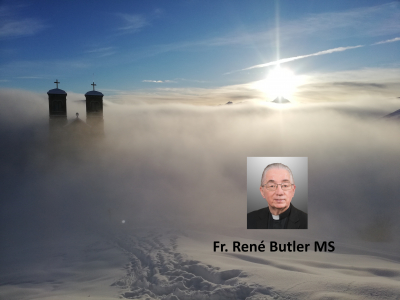 St. Paul, in the second reading, describes his ministry as “not seeking my own benefit but that of the many, that they may be saved.”

This is exactly the example given by Jesus in the Gospel. He healed a leper, but not to attract attention to himself. Otherwise, why would he ask the man not to tell anyone, and why would Mark mention the inconvenience caused to Jesus when his fame began to spread?

Jesus acted because he was moved with pity. Before him knelt a man who was not only sick, but who was obliged by the Law of God to self-isolate, to practice social distancing, and to cover his mouth.

Moved with pity, the Mother of Jesus came in tears to La Salette. She asked nothing for herself. She was concerned about others: her people and her Son.

We might ask ourselves, “When is the last time I felt pity?” No doubt we will find many examples, among family and friends, or from the news reports of disasters and tragedies of all kinds. There are forms of marginalization directed at others because of social, religious and even political differences. Opportunities for experiencing pity abound.

The next question is harder. “Moved with pity, how did I act?” Perhaps the question seems unfair. After all, Jesus and Mary were able to intervene in a supernatural way.

La Salette priests are in a position, of course, to administer the Sacrament of Reconciliation. They do so gladly, and La Salette Shrines specialize, so to speak, in making confessors readily available.

For sin is a disease underlying so much of the evil in today’s world. Today’s Psalm offers great hope: “I acknowledged my sin to you, my guilt I covered not... and you took away the guilt of my sin.”

Priest or not, all of us can do something. Most of us will spontaneously respond to console someone we know who has suffered a great loss. Dedicated to the cause of reconciliation, we are determined never to be the cause of alienation to another person.

Jesus showed no hesitation before the leper’s plea. “I do will it.” Like Jesus, like Mary, let’s do what we can.