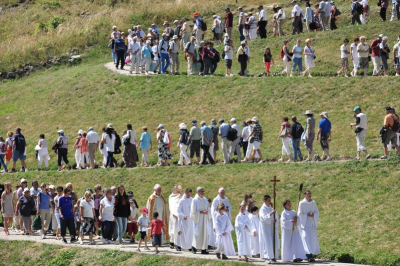 Letting oneself be guided by God

Conversion does not necessarily mean just turning away from evil and toward good. This can be called a conversion that saves eternal life.

There can also be another conversion, consisting in renouncing the good that depends on our will, which in its own way discovers a beautiful and good vocation in life, and follows the vocational path indicated by God’s decision.

As religious we should be aware of our natural vocation to family life, to marriage and to paternity, but we have chosen to live the religious vows, inspired by the Message of the Beautiful Lady or by the example of life of the members of La Salette. In this way, we have interpreted God’s will for each of us; that is, we have converted to another vocation, more demanding than the natural one. And Mary, did she also experience a conversion?

In the first sense - never, because she is an immaculate person.

In the second sense - yes, and many times.

She already had her plans for a virginal life in her marriage to Joseph. She was to become a wife and housewife in the house of Nazareth. This is how she had interpreted her vocation in life. At the Annunciation of the Angel, God changed this plan and Mary immediately “converted” her will, making her obedient to the will of God. Asking the Archangel Gabriel, the question: “How is this possible? I do not know any man”, she practically wants to know who should participate in the conception, since with Joseph she had already established the pact not to be joined carnally. The Virgin Mary immediately points to the concrete. As we know, Gabriel explains to her the role of the Holy Spirit in this act. Her famous fiat voluntas tua is a decision to abandon her own (very noble) plans and to involve herself fully in God’s unexpected plan.

Similarly in Jerusalem, having found Jesus after three days, she does not understand Jesus’ explanations, but she keeps all these things in his heart. She does not allow herself to be tormented by thoughts about not paying attention to Jesus, but she imprints this fact in her memory: she converts (turns) her thoughts to God and expects explanations from Him. She recognizes that she will receive explanations at the right time, when God wills it. Perhaps that experience of the three days of separation helped her to sustain the three days of waiting for the resurrection of her crucified Son. There is yet another trait of conversion in Mary’s life.

When people began to judge Jesus, believing him to be insane, the family wanted to defend his reputation and sent for the Mother. When Jesus learns that His Mother and brothers are waiting for Him, He replies, “Who is my mother and who are my brothers?” And turning to those sitting around him, he says, “Here are my mother and my brothers.” (cf. Mk 3:20-21.30-35).

In this event, Jesus did not fail to mention doing the will of God. Why is this an occasion of conversion for Mary? She understood at that moment that her role as Mother, Educator and Friend of Jesus had ended. From then on, she became the disciple of her Son in doing the will of God. Maintaining the authority of the Mother of the Savior, she follows the example of humiliation and obedience to her Heavenly Father, following the model of Jesus, in her journey of faith.