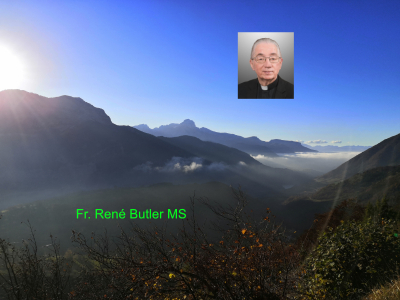 Today, Daniel prophesies “a time unsurpassed in distress since nations began.” Jesus describes alarming signs preceding the end-time. We may be tempted to draw a correlation between these readings and our own time.

If so, we wouldn’t be the first. In fact, there has hardly been a time in the history of the Church when persecutions, natural disasters, epidemics, etc., were not seen as signs of the Second Coming of Christ.

This is not a bad thing. It reminds every generation to remain steadfast in the faith, as we joyfully anticipate the return of our Savior, who offered the necessary blood sacrifice to redeem us from sin.

The opening prayer of today’s Liturgy asks God to give us “the constant gladness of being devoted to you.” How many of us have found this? At La Salette, Mary noted that very few people attended Mass. In 1846, France was not known for its religious fervor. On the contrary, it was suffering from what we might call “faith deficit disorder (FDD).”

The Beautiful Lady proposes a kind of FDD therapy: prayer, Lenten penance, respect for the day and name of the Lord. Ever attentive to her people’s need, she not only speaks of frightful events, but offers hope as well.

Daniel writes of “everyone who is found written in the book.” Jesus says, “The Son of Man... will send out the angels and gather his elect from the four winds, from the end of the earth to the end of the sky.” Mary uses simple words to express the same reality: “My children.. my people.”

She knows the wonderful truth that we find early in the Catechism of the Catholic Church: “The desire for God is written in the human heart, because man is created by God and for God; and God never ceases to draw man to himself. Only in God will he find the truth and happiness he never stops searching for” (no. 27).

The psalmist rejoices to call the Lord “my allotted portion and my cup.” All the readings today point to the God who created us in his image and who wishes to gather us to himself. Steadfast in faith, we do not fear his coming.