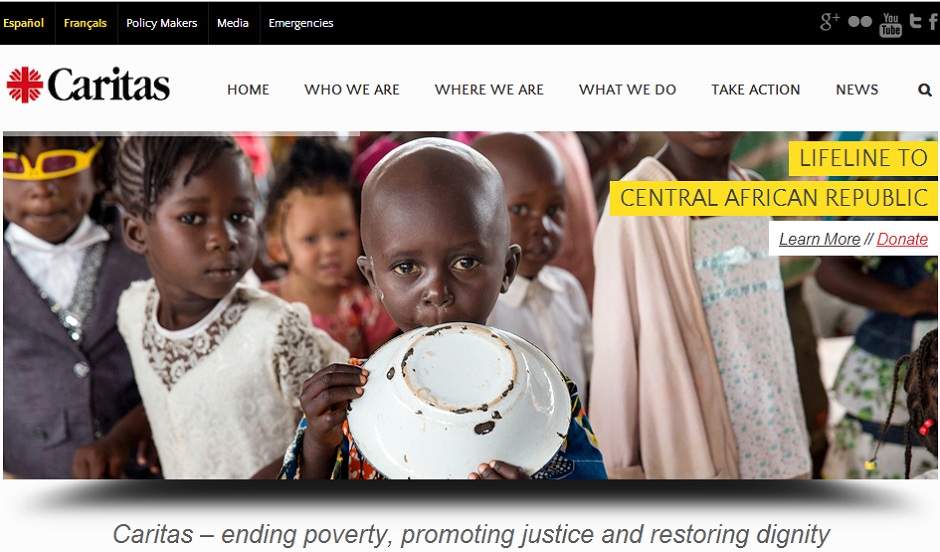 or Caritas in local language.

International Catholic charity under the guidance of the Holy Father, Aid to the Church in Need’s mission is to help suffering and persecuted faithful worldwide.

Initiative for a UN Decade of Interreligious and Intercultural Dialogue, Understanding and Cooperation for Peace

The long-term vision of a United Nations Decade of Interreligious and Intercultural Dialogue, Understanding and Cooperation for Peace is for a genuine and lasting peace that will be deeply rooted in diverse people’s spiritual beliefs and cultures as well as in the hearts of all human beings.

CATHOLICS CONFRONT GLOBAL POVERTY (CCGP) IS AN INITIATIVE OF THE UNITED STATES CONFERENCE OF CATHOLIC BISHOPS AND CATHOLIC RELIEF SERVICES. IT REPRESENTS THE OFFICIAL VOICE OF THE ROMAN CATHOLIC CHURCH IN THE UNITED STATES ON POLICY ISSUES RELATED TO IMPROVING THE LIVES OF POOR AND VULNERABLE PEOPLE WORLDWIDE.

Voice of the Martyrs

The Voice of the Martyrs is a non-profit, inter-denominational Christian organization dedicated to assisting the persecuted church worldwide.
The map of the Offices on the World

Social Teaching of the Church [STC]

What is The Social Teaching of the Church [STC]?

Faced with the "great drama" of the modern world caused by the many threats that often accompany human progress, "no one can remain indifferent." (RH, 16) The church, when addressing this area, is aware of her limitations. She does not take on the role of providing solutions to all the problems that confront the world; especially since there are great differences in the degree of development between individual countries, and there are very different situations in which committed Christians find themselves. The Church, however, can and should present, in “the light drawn from the Gospel,” the principles and guidelines necessary for society’s proper organization for the protection of human dignity and the common good.

We must always distinguish between the official Social Teaching of the Church and the views of different schools that deal with the systematic explanation, development and organization of the social thought contained in papal documents. The essential elements that define and describe the nature of STC follow:
- STC was born from the encounter of the Gospel with the specific problems occurring in society.

- The issues referred to by STC come from moral reflection on research, but they are also drawn from the experience of the Christian community which daily experiences various manifestations of poverty, and problems associated with an industrialized society.

To understand the evolution of STC it is necessary to refer to the theology and philosophy which form its foundation, as well as the human and social sciences.

STC has its own identity with a particular theological profile.

The theological sources of STC are Scripture, the teaching of the Fathers and theologians of the Church, and the Magisterium.

Its fundamental and primary subject is the dignity of the human person with his inalienable rights, which constitute the essence of "the truth about man." The object is the whole Christian community, in union with and under the leadership of legitimate pastors, whose real collaborators are laypeople with their own experience of Christianity.

The content of the STC includes the study of the human person, as an individual and in society, thereby addressing the whole man, as a specific entity and the fundamental reality of Christian anthropology.

The purpose of STC is that of pastoral ministry to the world, which aims to foster an integral human development through the practice of Christian liberation in the perspective of life here and hereafter.

This is not only about the proclamation of some "pure knowledge," but presumes both a theoretical and a practical knowledge, which have a pastoral orientation, consistent with the evangelizing mission of the Church in the service of the whole person, of each human being and of humanity in general.

In every age and in every situation the Church again and again takes on this ministry, fulfilling a triple role in society:
- she proclaims the truth about the dignity of the human being and his rights;
- she exposes injustice; and
- she contributes to positive change in society and to true human progress.

THE THREE DIMENSIONS OF STC

In STC we can distinguish three dimensions: theoretical, historical and practical. There is, first and foremost, the theoretical dimension, because the Magisterium of the Church has directly formulated its social doctrine in many documents in an organic and systematic way. In this the Church indicates a path leading to the establishment of relationships among people, based on universal principles acceptable to all.

We are describing a sustainable ethical policy, and are not so much concerned with views changing over time, nor of "matters of socio-economic development, because for this [the Magisterium] has neither adequate resources nor the vocation."

The social doctrine of the Church also has a "historical dimension," because the application of immutable principles is carried out in the context of a particular vision of society and is inspired by a reflection on its current problems.

Finally, there is the "practical dimension" because social teaching is not limited only to proclaiming the foundational principles nor to interpreting historically specific social phenomena, but it also suggests the effective application of these principles in practice, applying them to concrete situations as much as is possible and necessary in the circumstances.

Seeing is to notice and investigate real problems and their causes, the analysis of which, however, properly belongs to the human and social sciences.

Judgemeans to interpret this reality in the light of methods of social science meant to evaluate social phenomena and their ethical implications.

Acting is directed toward the choices made. It requires a true conversion, that is, the inner transformation which allows a person to pass through the purifying light of God, and be open to his directives and ready to fulfill them.

It is not the Church’s goal to make a scientific analysis of social reality. Christian discernment – understood as the search for truth and the evaluation of the accuracy of judgments – permits us to explore the essential causes of social ills, especially injustice, and at the same time benefit from a proven, but non-ideological application of the human sciences. The aim is to formulate an objective assessment of social reality in the light of permanent principles and to name specific, appropriate solutions - those possible and available in the circumstances - to remove injustice and foster the necessary political, economic and cultural change.

The social doctrine of the Church, because of its role as a bridge between the Gospel and the concrete reality of man and society, must be constantly updated and adapted to new situations emerging in the world.
HP

We present a table of Contents of Compendium of the Social Doctrine of the Church. It can be used as an aid in organizing the School of JPIC.